Thought for the day :"All instruments looking for intelligent life point away from earth."

In the light of the last week or so - and the direct challenge to the Guardian Newspaper and retractions from other newspapers from Grand Lodge regarding the "discrimination" against Freemasons, I was interested to read this article on one of my Masonic Lists which dealt with an analysis back in 1991 by the (then) Grand Secretary John Hammil. An analysis of how the Grand Lodge got into the situation it did - from being a most respected organisation in 1939 to a pariah by the 70's ....

In talking about John Hammil ....


In 1991 he made a masonic lecture tour in Australia and gave lecsit Strong Man Lodge in London lectures on various masonic subjects. One of them was “Contemporary Anti-Masonry in England,” which is found in Masonic Perspectives - The Collected Paper of John Hamill published by The Australian Masonic Research Council in 1992.

More than 30 years ago, in the mid-1980s, anti-Masonic hysteria took place in England. The late Stephen Knight’s book, The Brotherhood, which was released in early 1984 touched it off. UGLE had been using a press cutting service which provided copies of national and local news articles about Freemasonry published in the British Isles, according to Bro. John: “Up to January 1984 we were lucky if we got 60 or 70 small cuttings per year. Throughout 1984, 1985 and part of 1986 there were times when we were getting 70 to 80 press cuttings per day. That was the sort of effect it had. As a result of that we brought in changes. Our Grand Master acted and made the major change in policy. We had a lot of problems persuading our Brethren what we were doing was for the good of the Craft.” So the Grand Master took the initiative to deal with the unfavorable situations in a positive manner and UGLE changed its passive policy and started taking proactive and positive steps. As I recall, mainly Bro. John and the then Grand Secretary, Commander Michael Higham, handled media relations and performed other related work, serving as spokesmen of UGLE.

I have excerpted from this very informative paper the section in which he explains the circumstances under which UGLE moved to take the actions it took to deal with such attacks:

For some reason, which has not yet been established, Grand Lodge began to look in on itself in the late 1930s and the desire for privacy spread downwards to individual Freemasons. This trend was greatly helped by the outbreak of World War II in 1939 when the population as a whole began to foster privacy, out of a fear of spies and fifth columnists in the face of an all too possible German invasion. When peace returned in 1945 and the populace rushed to get back to normality, unhappily Freemasonry continued to look inwards, was over-protective of its privacy and made no public response to media comments on Freemasonry, whether in favour of or against Freemasonry. Regrettably it reached the stage where brethren did not even speak about Freemasonry within their families or circle of friends. As a result Freemasonry became divorced from the society in which it existed and generations grew up who, unless a member of their family or a friend was a Freemason, did not know of its existence unless it was brought to their attention by the media.

Grand Lodge's policy of "no comment" on comments from outside Freemasonry was perhaps the largest contributor to the present problems. Initially it was a good policy and had the effect of defusing or turning into a three-day wonder any nonsense the media tried to stir up. If the other side does not respond there cannot be an argument. Unhappily the world has changed and from about the mid-1960s a polite "no comment" was taken as an admission that there was probably something in the story - the "no smoke without fire" syndrome. The less scrupulous in the profession of journalism quickly realised that they could print any nonsense they liked about Freemasonry, provided that they observed the laws of libel, without any fear of any official reaction or correction. The combination of the intense desire for privacy and the nonsense journalists were able to get away with meant that the general public in England had very little factual and accurate information against which to gauge the nonsense they had read in the press. As no official comment or reaction was made it is not surprising that an aura of suspicion grew up around Freemasonry.

Grand Lodge was faced with a dilemma in 1984. With the Knight book, and the media reaction to it, it was obvious that something had to be done - particularly as suspicion about Freemasonry was beginning to affect the careers of some brethren who were open about their membership. It was the MW The Grand Master himself (HRH The Duke of Kent KG) who gave the lead. In his address to Grand Lodge in March 1984 he stated his belief that the time had come to alter the traditional response of "no comment". He emphasised that he was not suggesting a full-blown public relations campaign and certainly not a recruiting drive but he believed that ways could and should be found of better informing the public as to the nature, purposes and history of Freemasonry and of countering factual errors appearing in the media.

The MW The Grand Master having spoken, it fell to the Board of General Purposes to implement his suggestions. They set up a small Information Committee to investigate and report back to the Board. The Information Committee quickly realised that it had a double job to perform, for channels of communication within the Craft itself left much to be desired and if the Craft was to be seen to speak with one voice it too would have to be educated. A number of major new policy decisions were taken:

1. The Grand Secretary was to be official spokesman on national matters and Provincial Grand Masters were asked to appoint local spokesmen to deal with local matters.

2. A Grand Secretary's newsletter was introduced and copies were provided for every member of the Craft so that within three weeks of every quarterly meeting of Grand Lodge each member of a lodge would be aware of what had taken place.

4. When any organisation announced that they were to inquire into Freemasonry the Grand Secretary was empowered to write to them and to offer to discuss Freemasonry in general or any particular problems they might have.

5. Although non-Masons had been able to visit Freemasons' Hall and the Grand Lodge Library and Museum for many years as guests of members, the Hall was opened to the general public and in 1986 a permanent public exhibition telling the story of English Freemasonry was opened by the Grand Master, with the full panoply of the media present, and in the first three years it was open over 70,000 people have visited it.

6. Errors of fact or interpretation in newspapers and magazines are quickly corrected by means of letters to the Editor and official spokesmen take part in radio and television interviews.

7. In 1987 Grand Lodge produced a thirty-minute video, The Freemasons, showing what Freemasonry is today, a little of its history, what it stands for and examples of the charity work carried out both within Masonic charities and Masonic assistance to non-Masonic charities.

The list might not appear long but it has involved an enormous amount of "back room" work. It is only fair to ask how successful it has been. The problems to be tackled have been enormous, changes in public opinion do not occur overnight, but a number of achievements have been made:

A. The public are now aware that there is an alternative view to the views they receive from the media and anti-Masonic writings. They are also becoming aware that there are sources of accurate information available to them.

B. The media are now very much aware that any nonsense they write about Freemasonry will be challenged immediately. The more sensible in the fraternity of journalism now contact either Grand Lodge or a local spokesman to verify details of stories they have picked up.

C. Groups seeking to inquire into Freemasonry know that they can now discuss Freemasonry with authoritative spokesmen and that if they misinterpret Freemasonry they will be challenged, and have been. A notable success occurred when the London Borough of Hackney attempted to blame problems within the authority on Freemasonry's influence within the administration. At great expense they employed a Queen's Council to make an independent inquiry. As an independent lawyer he was given unprecedented confidential assistance by Grand Lodge and to the chagrin of the local authority proved conclusively that Freemasonry had nothing to do with the problems in the authority, which were a result of maladministration and lack of executive control.

D. The Craft in general is becoming more aware of itself and as a result of that awareness more willing to talk about Freemasonry with families and friends and so spreading more knowledge amongst the public and killing the idea that Freemasonry is a secret society.

The struggle has been and will continue to be an uphill one. There are still those who will never be convinced that Freemasonry, far from being a conspiracy, is in fact a force for good in society, but gains are being made regularly. The reaction to the recently published follow-up to Stephen Knight's The Brotherhood [Martin Short’s Inside the Brotherhood Further Secret of the Freemasons, 1989] has been interesting. The national media has largely ignored it. It has had a lot of interest in local newspapers but the comments have been evenly divided between those who wished to promote a sensation and those who recognised the book for what it is - another addition to the long list of conspiracy theory books bearing little relation to actual facts.

As with any major policy change there were difficulties in persuading many English brethren that change was necessary and that the change would not exacerbate the problem. Having seen how Grand Lodge has handled the problems, the majority are now convinced that the change was right and will ensure the future of English Freemasonry. Having started from a defensive position those involved in the policy change have now been able to move to positive action. In an ideal world none of us would have problems but we live in an all too human world. There will always be those who will decry any organisation which works for good. Rather than converting everyone to Freemasonry what we would like to see in England is a return to the pre-1939 situation with Freemasonry being recognised as a perfectly normal part of the social fabric, working for the good of society.

Something to drink to...
Cheers 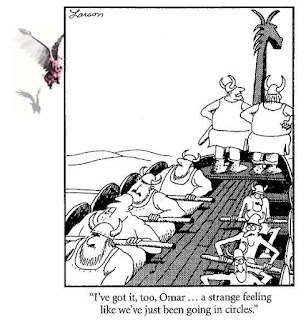