The reason it must be spring, is that I have been out in the garden today... That is not really a big deal, though  today was the first real foray for the chickens, rambling around in the garden, the new gate in place, and scratching at the herb bed and  under the watchful eye of Delft and Rusty. It was also the first day that I tried to start sorting the garage out - that of course will be the subject of a different Blog as we go into the next stage of the "House Clear"...

No, the reason for the Spring declaration is that it was too warm for jeans. Too warm for leggings. Yes - today the shorts came out  and probably will be the main clothing for the remainder of the year ....
I know that in the past the shorts have been on display during December , but the start of this year it has been cold.. Very cold...  I mean - really  really COLD!!!!

Did I mention that it has been cold??

But - today - the shorts were warranted!  It was a very pleasant afternoon ...

Of course - on Facebook it had to be the day to mention "Back to the Future" and a meme that has been floating around and had to be changed - It was the 20th April - but the time became important - it was a quarter to eleven....

And on the Vollsanger Youtube - we moved into the next stage of the Global Green One Sage...
We get to see the Green One sung in Persian...


so, it must be time for a small glass of Scotch and an early bed time...
Posted by Vollsanger at 23:09 No comments:

Spring and Winter seem to be in conflict at the moment.  Start of the day was blustery and cold with a hint of rain - but a little sun came out later to tempt a nose out into the garden...  Not really an option though...

So a couple more birthday cards for future use.. 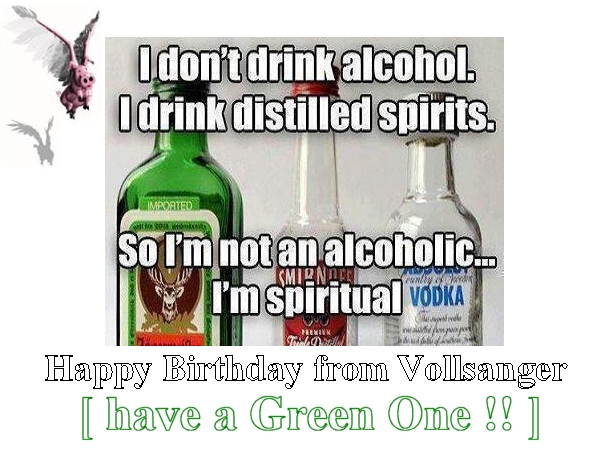 Seems about the right idea... 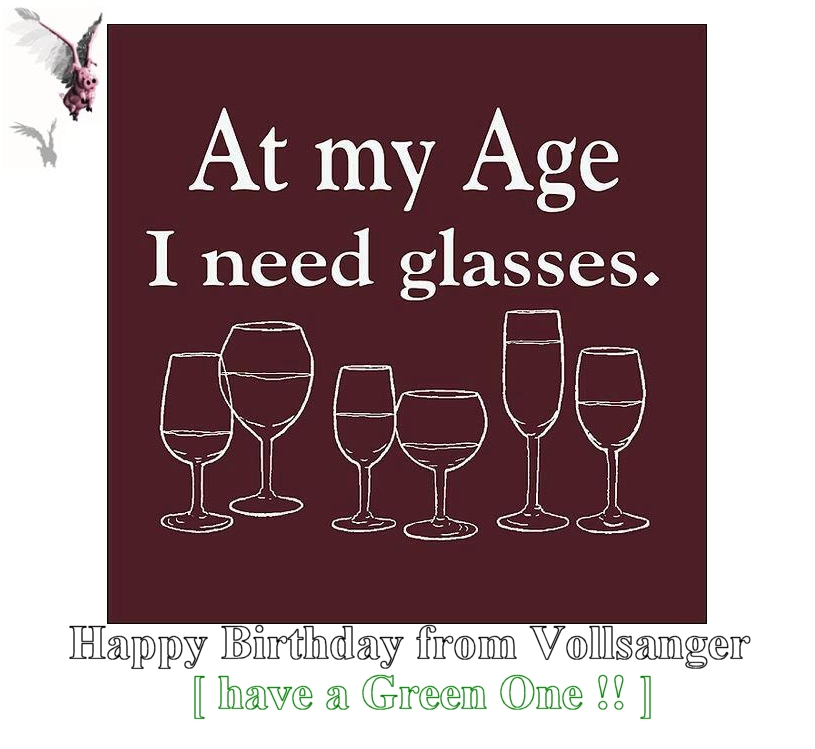 A trip out to Tenby for the evening to finish the day and now a quick glass of Scotch before turning in.

Wednesday - and after a really nice hint of Spring yesterday - it is a real disappointment to feel the harsh bite of winter back in the air today. After a day of telephones and paper, and a nostalgic meal of Pasta Cheese and Tomato Sauce ( staple diet of the early seventies and convenience for today ) the wind veers around to that one position where the dog flap stays at a 45 degree angle and warmth of the house dissipated at geometric rate......

But the upstairs living room remains a small haven of warmth - though reading the electricity and gas meters today and doing the "rule of thumb" calculations for the last quarter is doubling my monthly payments or placing me in penury...  so it seems easier to sit at the computer and consider the future...

And the future involves a transition from the Crimson Moon to whatever the future holds.
For Susie, the Smallholding is clearly the way forward. Chickens in the back yard - concreting the posts into the ground for the gate that will stop the Chickens from straying onto the back lane, too cold to go out today,     my future tasks are to clear the house suitably for the examination of an estate agent and prepare the house for sale.

So today the first stage included the first options for changing the Vollsanger status. For the last five years I have been sending Facebook birthday cards from the Crimson Moon  - somehow no longer appropriate as the ownership has moved on. The Crimson Moon will have to continue its own marketing, but I still have many friends out there - and there is a marketing opportunity for the Vollsanger Brand..

And so, with the assistance of Paintshop Pro - the first of the Vollsanger Birthday Cards were created today ... 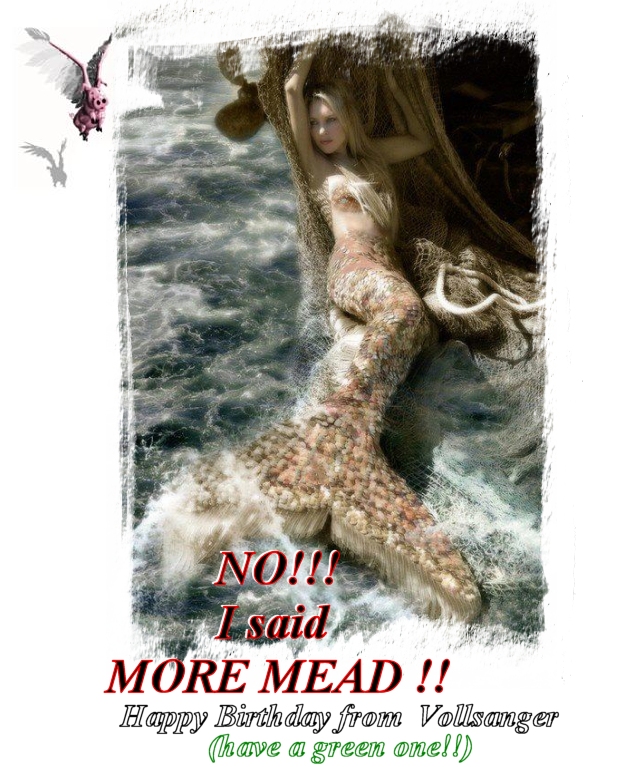 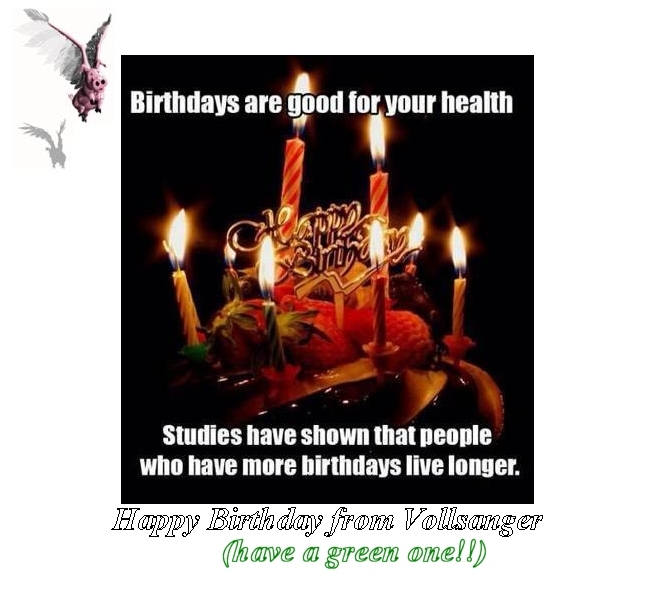 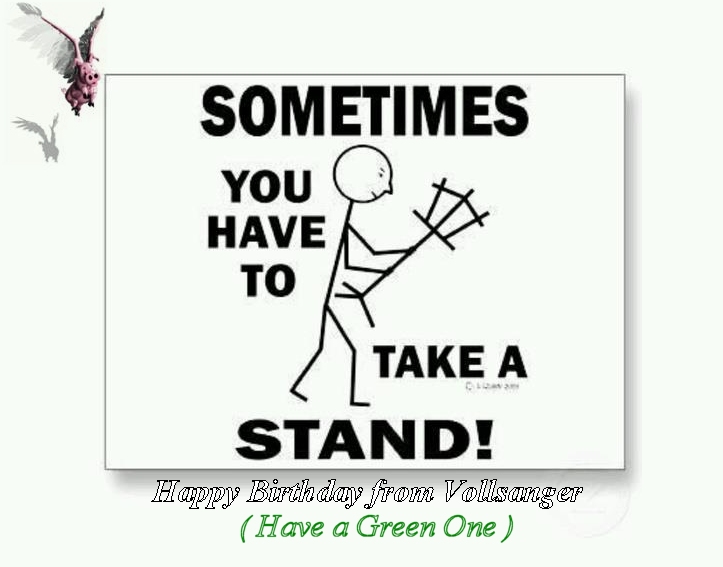 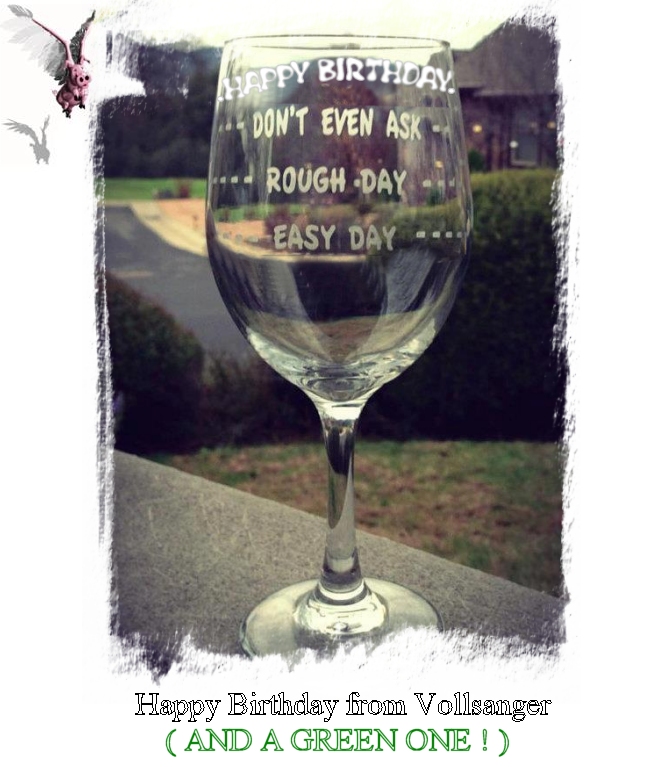 and so a happy birthday to all in the future...

Posted by Vollsanger at 21:30 No comments:

15th April - Back to Normalcy Monday

Can we define what is normal?
Well for us it could reasonably be anything so this Monday is really not totally unlike any other - but it seemed appropriate to get up a little earlier than normal and start on the mountain of paperwork that seems to have grown around me in the last few weeks.
Much of the paperwork is probably unimportant - but there is a bit of documentation that has to be sent off to the Insurance Company for the Bothy - which needs to go - and it is in the pile somewhere.
Maybe I should sort it into separate piles to start off.
That normally works and gives the delusion of making progress -
Three large piles - "Urgent", "Really Urgent" and  "Duw !! Duw!!"  as they say here in Wales....
That way something important may pop up to the top...

But while I sorted a bit of banking out and payments before 8.30am this morning - I did get a little distracted and put together a short video (as you do !!)

It was as we walked up the garden path on Saturday that we heard the distinct sound of a cockerel crowing in the Chicken House...  Our two cockerels were not meant to crow until they were at least a few weeks older and then they could be in the pot... but no !! not our precocious little things.

As a result - a new home was required as they are still too young and small to provide more than a sandwich - and so we did a trip down to the Tollgate - and a lovely roast dinner for Sunday and helped put the pigs in to the trailer ready for market ....

But the chickens of course had to have a a short video to commemorate their holiday...

Posted by Vollsanger at 10:55 No comments:

Somehow missed April Fools Day. Is easily done. Seems I have been unable to get into the blogging muse for a couple of weeks - as been a little busy.
But now down in Exmouth for a couple of days.
Bothy passed its general test at the Garage yesterday. Needed two tyres but that is standard and a couple of cautionary points - brake pipes will need replacing sometime and a tiny bit of non-essential welding on the sills - but all in all seems to be pretty sound. Rather glad as I am getting rather fond of it.

Trip to Glastonbury for the Glastonbury Medieval Fayre - and found the heater in the back a real life-saver. No idea how the leisure batteries connect to the electricity for re-charging - but the Solar Panel seems to cover most of the charging requirements.
Also managed to get 4 kegs of Lager and two kegs of cider into the back and drove with no problems - but then it should really !!

However - it seems that Re-enactors should not be allowed to sing LARP songs in the Crimson Moon. On the day of the battle I could hear the gentle refrain of the Green One - but somehow the words were wrong.....

Then a trip to Macclesfield, overnight stay in the Masonic Hall Car Park - which was a bit of a surprise to the local members who were concerned  that an Old Age Traveller had descended into their car park - and was the fore-runner of some form of hippy fest.....  Soon introduced myself and enjoyed a private tour of the Lodge building, first lodge formed in 1787 or so....  and a chance to practice on their electric digital Allen Organ. Impressive piece of machinery - at least 30 years old !!

But now in Exmouth. New Tom Tom guessed the travel time well - within a minute of calculated journey time. And our first night in the campervan with two of us sleeping. Too warm !!  Did I just say that ?? after the last few weeks? Me ?? Too warm??  Yup - had to put the heater off- and get rid of the extra blankets. And open the window !!!

And so the Bothy now has the seal of approval of the rest of the family.

Erin seemed to mishear the name at first. And so Buffy the Boffy is now her name..  Buffy the Van Pyre Slayer !!  Seems Legit !!

Have to get some lettering and finish the job off...