Thought for the day:"I may be wrong - but it is highly unlikely" 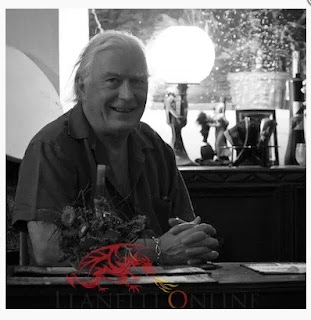 Iain Sewell is a man of many talents and varying careers. The son of a former journalist at the Daily Mail. Iain climbed through the ranks and became a Chief Inspector in Dyfed Powys Police Force. He was in the chair of the St Teilo Lodge of the Freemasons again in 2015-6. Iain was also known as the owner of the Crimson Moon Tavern a wandering minstrel and ardent participant in mediaeval re-enactments going by the name of Vollsanger. He was born in 1954 and raised in Glasgow. He left when he was around four years of age when his father moved to London to work for the Daily Mail as a political correspondent.
Iain’s father was a journalist working for the Empire News as a foreign correspondent. Here Iain speaks about his father’s working life. He began by saying: “My Dad felt that journalism gave him the big break and he was able to go anywhere. My Dad was working at the Daily Mail, as political correspondent so home life was interesting. Parliament didn’t start until lunchtime and there were late sittings in the early hours of the morning. There were around 13 bars in the House of Commons and therefore he did a lot of drinking, everybody did. At least seven Prime Ministers visited our house over a period of time, not all when they were serving prime Ministers. It was an interesting childhood rubbing shoulders with these people even though we lived in a semi detached in Edgware.”

Marriage and a job with Dyfed-Powys Police
Iain left school with his A Levels and began work with a cleaning company in London rising to a management position. Talking about his early career and getting into the police force in the late 1970’s he said: “I took a year out and began working. I had met my wife Susie by now and we were living in a small flat. I wanted to do political history so I applied for a place at Southampton and Aberystwyth and took the place at Aberystwyth.
“We packed everything up and started our married life in a tent in a field in a farm called Troed-y-rhiw in Rhydyfelin. We began looking for a home and rented a house at no1 New Road at Llanfarian paying £20 a month rent. I was too young for a grant so I had to look for work again. I started at Newman’s grocers as a driver whilst still going to lectures. One day I saw a sign in the window of the local police station asking ‘Have you thought about a career in the police?’. I hadn’t really thought of it but I had ten minutes spare so I went in and asked for some information. I told the person behind the desk that I was just finishing university. With that an inspector came down and asked me to come back later in the day. I went back and there was a chief inspector there waiting to chat to me.
“Dyfed-Powys had not had a graduate entry so I was one of the first. Within 28 hours I was in Carmarthen having an interview with the Chief Constable in the suit I got married in. I was told I would start in the October of 1976. At that time if you wanted to join South Wales police you had to be a rugby player, 6ft and good if in trouble in an alleyway at night.
“My first station was Tenby. There were two police officers and a sergeant. If we got in trouble the officer manning the station would have to walk or run to help. People ask how much fighting skill you need as a policeman and my answer is, you need to be able to talk people down, to know how to take charge and how to reduce friction. When I went to work in Llanelli if something kicked off there were six officers and they would grab someone and bang them in the cells. There is a different style of policing nowadays. I left before the police began wearing body armour. There was a lot more respect for the uniform at that time.”
Freemasonry 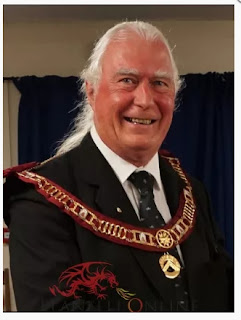 Iain has been a freemason since 1983 and has held a number of high positions in the society. He maintains that there is a lot of misconception about the society, which he says is no different to the structures within rugby or football clubs.We asked Iain to provide a layman’s guide to Freemasonry. Beginning with the way in, which members join the freemasons he said: “Freemasonry is not an invitation order. The fundamental principle of freemasonry is ‘to be one, ask one’. Anyone can ask to join it is like any other group although we don’t want friction so checks are made to see if you have a criminal background, if you are financially unviable, if you are antisocial then we don’t want you. If you are a good egg and you want to make society a bit better and if you care for your fellow man and are interested in intellectual challenges you can ask and your name goes forward.
“My father was a freemason and that allowed me to enquire about freemasonry locally. Last week I went back into the chair of St Teilo lodge for the third time. The society went through a long period of bad publicity. A lot of it was aimed at the police. After the war during the reconstruction freemasons were instructed by the grand lodge that they should not take advantage of their membership of the free masons. It went towards anonymity for that reason.
“The past masters in Llanelli were huge people in the town who built Llanelli. We are a lot more open now and you can see who we are by going online to our website. In freemasonry I have no badge to say what I do, I am there in my own right according to my rank within the masons so nobody can ask me to help them just because I happened to be a Chief Inspector. We are not allowed to talk business or politics. It allows me to switch off completely. If I pull over my neighbour I am under certain pressure because I know them. It is no more than that if you happen to know them through the freemasons. The same rules apply to all regardless. In freemasonry we don’t make good people but we just might make a good man a little better.”
Vollsanger, a travelling minstrel 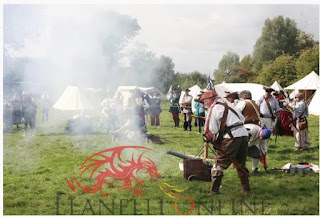 Iain is quite a distinguished looking gentleman with long white hair often tied back into a ponytail. His alter ego is a Vikingesque character by the name of ‘Vollsanger’. His weekends are often spent at re-enactments. Explaining how he came to be a viking character he said: “In 1999 my daughter brought home a ‘geek’, (her boyfriend) for Christmas and we asked him what he did. He talked at length about going off on weekends, dressing up as an Orc or a Knight and doing battle in a game system like Lord of the Rings. Very shortly he had a pair of old timers joining him.
“You play one of these characters and you fight in full costume and for two or three days you go away somewhere and it is good fun. From there we began a small business running the Crimson Moon Tavern, which is still going today.”
Iain takes the fighting side seriously and wears chain mail weighing in at around 9 stone. On a recent visit to Germany he got into battle and broke his arm. Now in his 60’s Iain shows no sign of slowing down and says he is busier than ever with all of his roles including being president of the NSPCC in Carmarthenshire.
Iain’s blog can be found at ‘http://vollsanger.blogspot.co.uk
I accept no responsibility for inaccuracies... 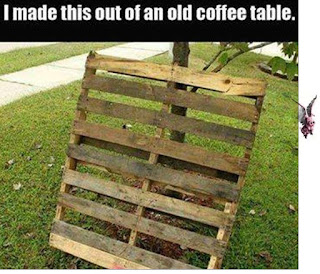