News this morning that Pete Seeger had died aged 94 - an excellent innings and a vast catalogue of songs. I read an account of his life which brought certain things forward that I did not know before. I knew that he played and toured with Woodie Guthrie, but did not know that he was banned in the 50's or that he was never invited to play on Hootenanny... 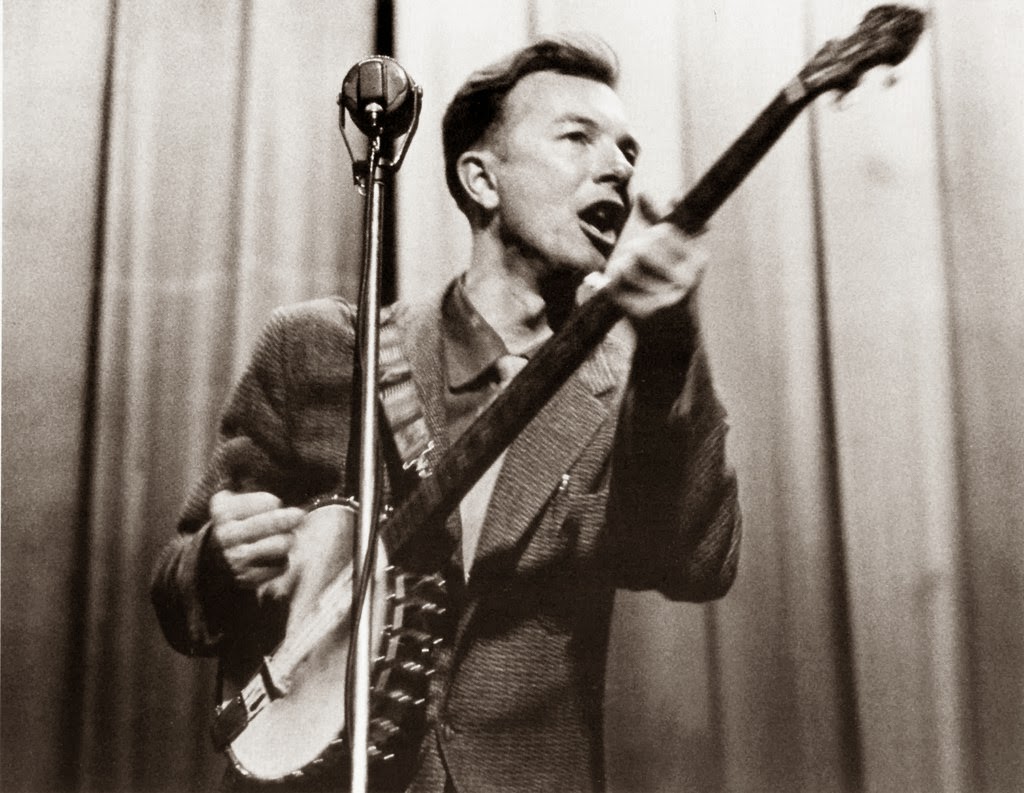 "Mr. Seeger was signed to a major label, Columbia Records, in 1961, but he remained unwelcome on network television. “Hootenanny,” an early-1960s show on ABC that capitalized on the folk revival, refused to book Mr. Seeger, causing other performers (including Bob Dylan, Joan Baez and Peter, Paul and Mary) to boycott it. “Hootenanny” eventually offered to present Mr. Seeger if he would sign a loyalty oath. He refused."  N York times

Best account I have read was here for those who wish to know a little more about the man and his music.
Pete Seeger - Account from the NY Times .

Lovely picture of Pete Seeger aged 2years old on his father's lap. He may have studied to be a journalist but I  think he was destined to be what he was - a campaigner and songwriter/singer. 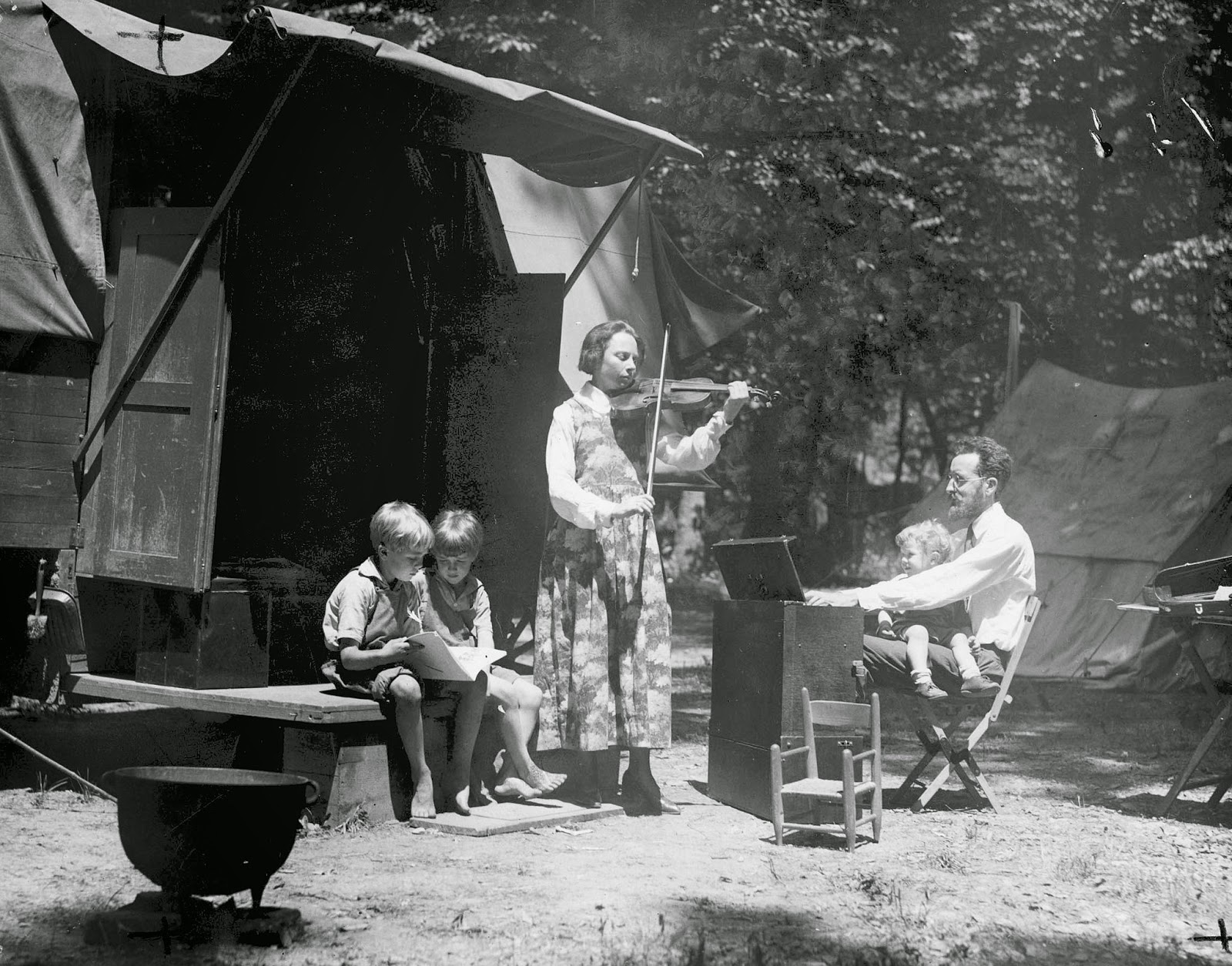 Much of my early playing was influenced by Pete. Simple folk songs and lyrics. My instrument of choice was always the guitar, but my banjo hangs on the wall accusingly. My early renditions of "Where have all the flowers gone" and "If I had a hammer" together with "Freight Train" - which I still sing as part of a medley of songs in C ... My guitars are now adorned with the Vollsanger Logo and Slogan "Here all Week". A poor substitute for the more powerful script that adorned Pete's famous 5 string Banjo... 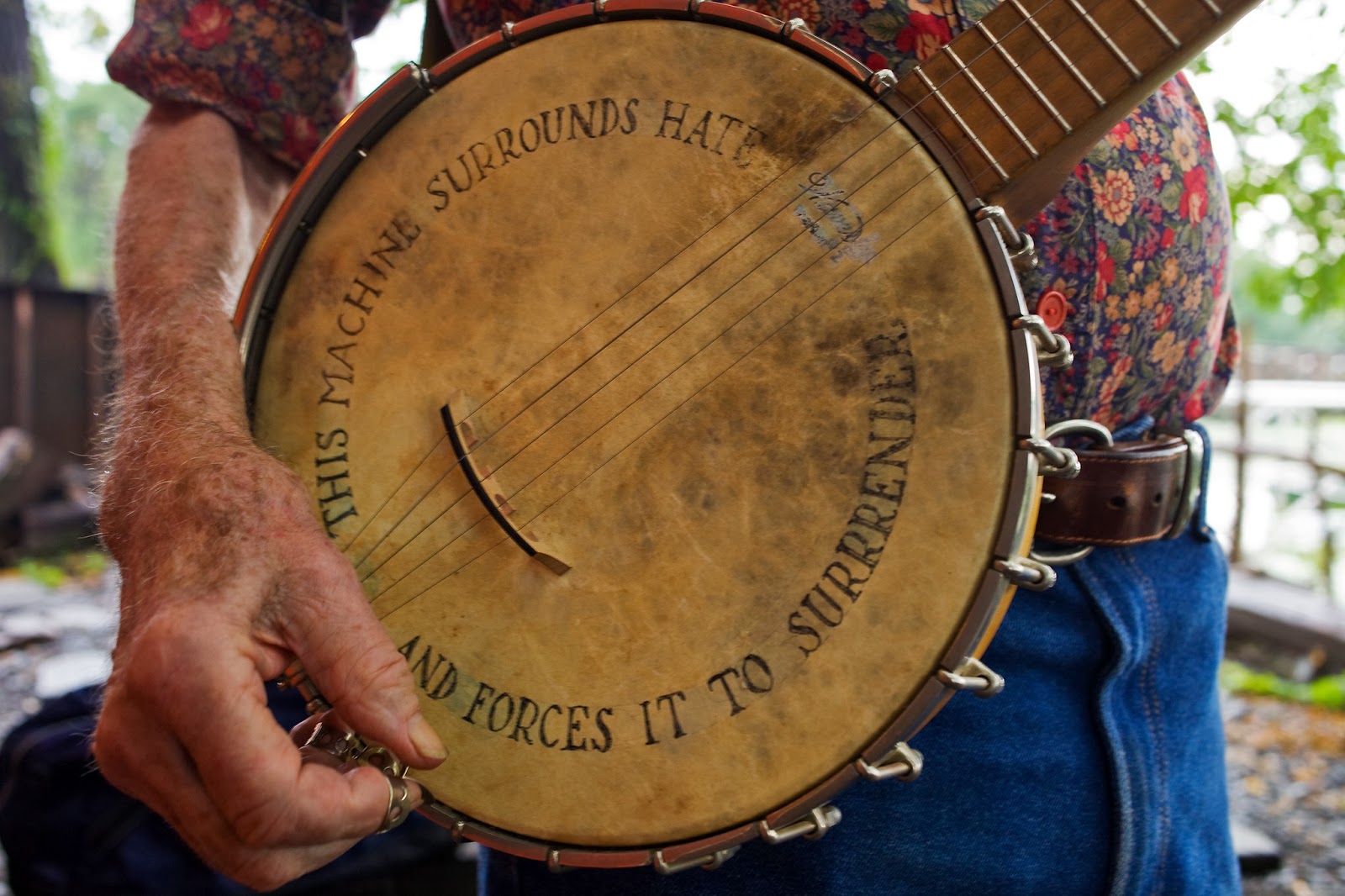 Of all the songs and influence that may have impinged upon me through my years from busking Hyde Park and Oxford Circus Tube station to playing Open Mike in Llanelli pubs and strumming under canvass in Taverns and foreign climes... there is a song originally written by Malvina Reynolds in 1962, and made famous by a number of people including Pete Seeger. Of course they all got the words wrong - as often happens with songs that I popularise these days, and introduced far too many colours and something about boxes....  but it is fair to say that I would not have 45,000 hits plus on Youtube if it had not been for that certain song....

As long as you make allowance for the use of the incorrect words...  this is one of the nicest arrangements I have found with an introduction by Arlo Guthrie - Tommy Sands and his Irish Orchestra. Particularly like the Green Dance in the middle ...

There is an open Mike slot in the Bucket and Spade tonight, or a Folk Train heading from Llanelli "up the Trax" - tempted to go and sing a few Pete Seeger numbers - perhaps a medley of "Where have all the Green Hammers Gone...."

[as a sort of post script of the day - I was looking through various pages on facebook and came across the Arlo Guthrie FB Page and a rather nice summary from him ,,,  he was having trouble writing the obituary and added these words which I thought were rather right for the moment

"Well, of course he passed away!" I'm telling everyone this morning. "But that doesn't mean he's gone."  ]