Thought for the day: " I was thinking of becoming a self-portrait artist - but just could not picture myself doing it "

Politics seems to be in the news today - and though I prefer to restrict myself to times gone by, occasionally some items seep through the dustbins of my mind.... The Greek election, and the possible disruption to the Euro - and how it may affect the price of wine... (I don't like French wine anyway!). The death of a Saudi King...   Which brought to mind this little anecdote, which really tickles me ...  Makes me feel poud to be British... like Al Murray the Pub Landlord - " A Proper Queen She is !!!  With a Proper National Anthem!!"


And so, whether you like the Royals or not - I somehow like to think that this one is true.. 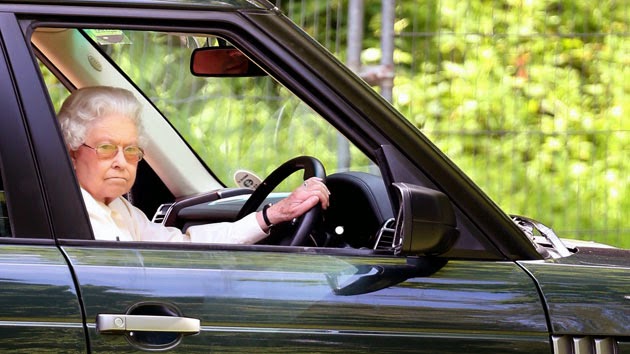 Great Britain's Queen Elizabeth II is known to have a wicked sense of humor, and some mean driving skills.

One day back in 1998, she deployed both spectacularly to punk Saudi Arabia's late King Abdullah bin Abdulaziz. Back then, Abdullah was a Saudi crown prince visiting Balmoral, the vast royal estate in Scotland. The Queen had offered him a tour of the grounds—here's what happened next, according to former British ambassador to Saudi Arabia Sir Sherard Cowper-Coles:


The royal Land Rovers were drawn up in front of the castle. As instructed, the Crown Prince climbed into the front seat of the Land Rover, with his interpreter in the seat behind. To his surprise, the Queen climbed into the driving seat, turned the ignition and drove off.


Women are not—yet—allowed to drive in Saudi Arabia, and Abdullah was not used to being driven by a woman, let alone a queen. His nervousness only increased as the queen, an Army driver in wartime, accelerated the Land Rover along the narrow Scottish estate roads, talking all the time. Through his interpreter, the Crown Prince implored the Queen to slow down and concentrate on the road ahead.

Royal custom discourages repeating what the Queen says in private, Cowper-Coles explained, but the anecdote was corroborated by Abdullah, and became, in the diplomat's words, "too funny not to repeat."

Abdullah went on to cultivate the image of a reformer as king. One thing he didn't change, despite the Queen's actions at Blamoral: women still can't drive in Saudi Arabia.