Thought for the day: "When you get a bladder infection you know urine trouble."

Had a good day today! Well, every day is pretty good at the moment, but there were a couple of high spots on a really nice sunny Wednesday in September. As the rains continue in Arizona and we blame the presence of Brother - in - law Paul for bringing the Arizona weather to the UK as a last ditch attempt by the Tories to keep Scotland in the UK... some images from the States are worth a share..

Now, my own experience of American divers in Phoenix has suggested that the state pretty well comes to a halt when a drop of rain arrives, and I mean a drop. When we were last there, traveling along the I 10 ( the interstate 10) a very light shower brought cars to a stop. Most windscreen wipers seem to be ineffectual and melted to the glass which does not help often..  However, here we have the tail end of a hurricane, and very unexpected weather.. as the following pictures also show... 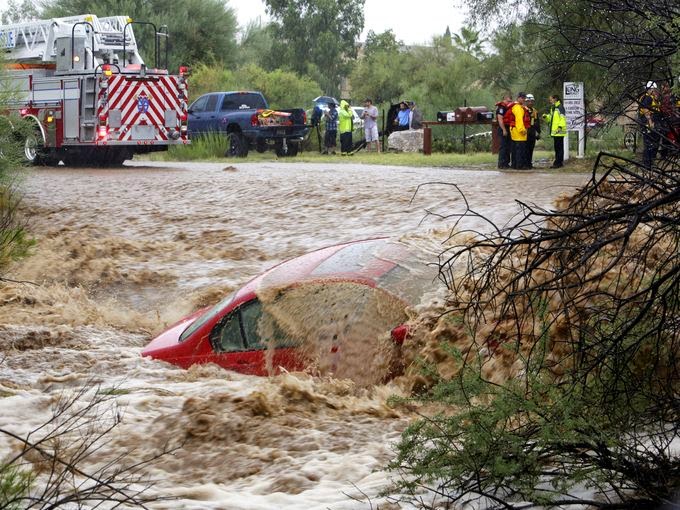 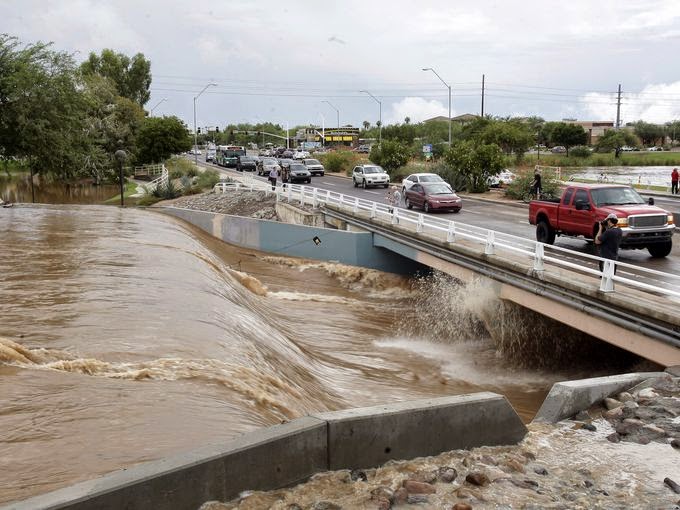 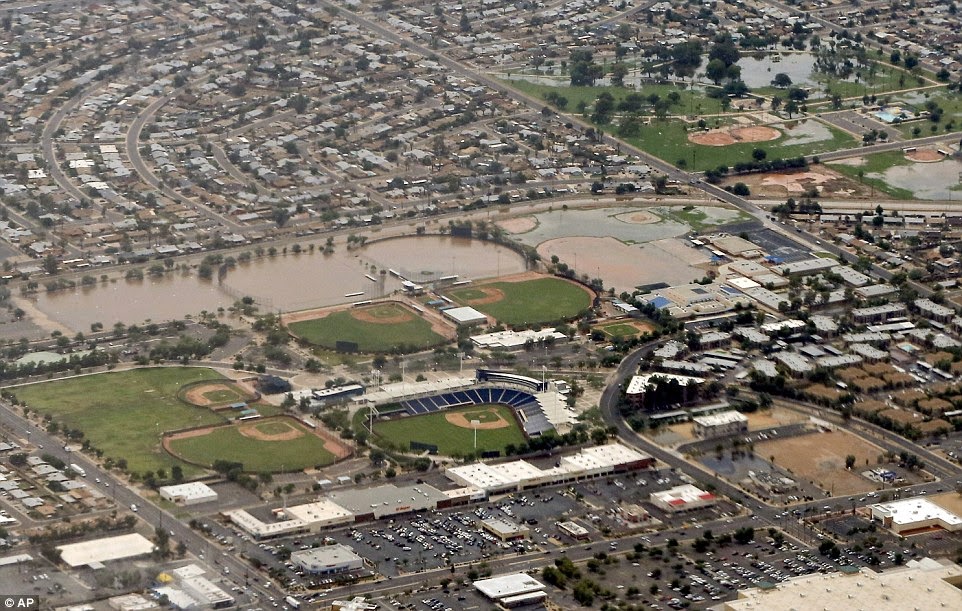 But that is not really why it has been a good day... though of course the sunshine always helps..

Instead of being at home all day, we took the opportunity of driving the "Colonials" through parts of Wales, and managed to stop at the Wiseman's Bridge Inn for lunch. Sadly the Cod in Beer Batter was not up to Paul's expectation, being a little "squashy" for his taste - probably a frozen fish put into the batter. I thought it was delicious and exactly as it should be - but after testing the local Fish & Chip shop he is now considering himself the expert on such matters..
Wiseman's Bridge has not changed overly since the days of the Aberystwyth University Sailing Club Annual Sailing Camp. The place I learned to sail without a rudder and how to cross the finishing line backwards. The camping field is a car park now and the other fields are a well laid out campsite for residential and touring vans, but otherwise the coastline is unchanged.
So a lovely lunch, at not over inflated prices, two cod and chips, a Ciabata and baked potato with ample portions - but that was not really why it was a good day..

On to Tenby. Pleased to see that the multi-storey car park is not inflating its prices - charging 30p for an hour. So a walk around the walled town, through Five Arches and along Upper Frog street and into St Mary's Church.  Had not remembered how big the Church is - claiming to be the largest parish church in wales - and dating from 1410 But that is also not the reason !

No - I got another premium bond winning today - doing well with a payment almost every month. Okay it is only £25 again - but better than a kick in the teeth or the amount that we might be getting from a bank or building society...

I also got an email from Herstmonceaux Castle, the Medieval Fayre. Apparently they were happy with the performance and presence at the festival and decided that rather than paying me the expenses that I had asked for - after all I was a new booking for them and they were taking the risk - they have decided to pay me double what I asked - without prompting...
That is not also financially welcoming, but as an unsolicited endorsement of my weekend extremely heart-warming.

So with this in view - I edited the video of the "Grand Procession" around the site. This was taken with the "Hidden Spear Cam" my video camera that sits in the spear I carry - such that no-one knows that the camera is there. Another piece of Over monitoring of the UK I suppose - but though it is a little shaky - I think it came out quite well. It is over 9 minutes but you can skip through if you wish.

So this is what people saw as Vollsanger strolled past accompanied by the Portcullis Minstrels, the United Players and a lot of drums !!! Just a happy chappy with a lute guitar under his arm and a spear over his shoulder  - followed by a very big lady !! it must be said.. 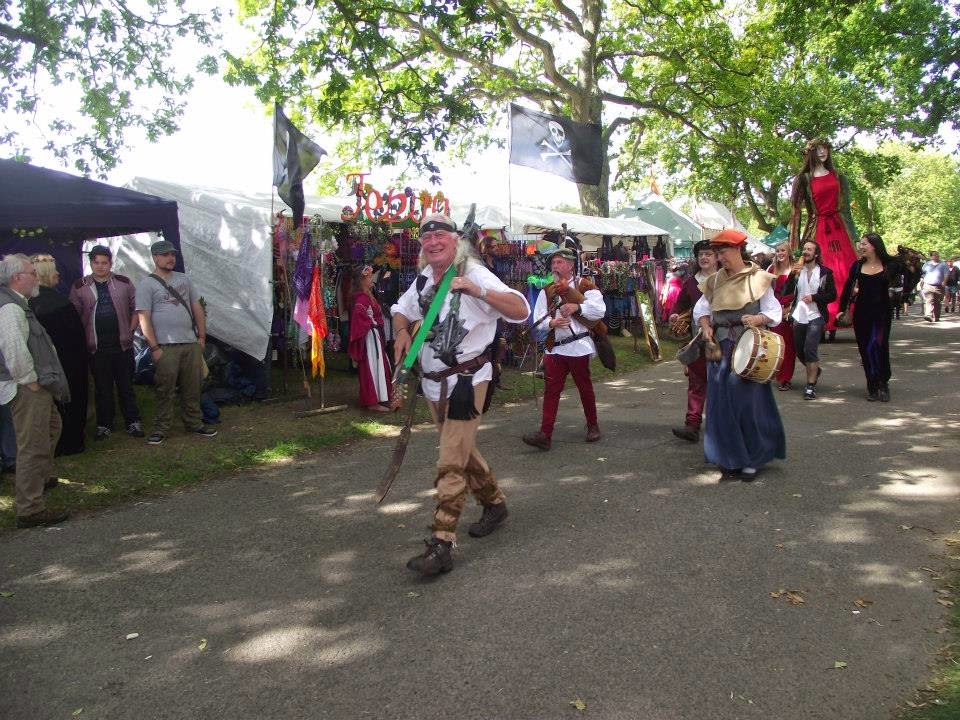 This is the Spear Cam in use... 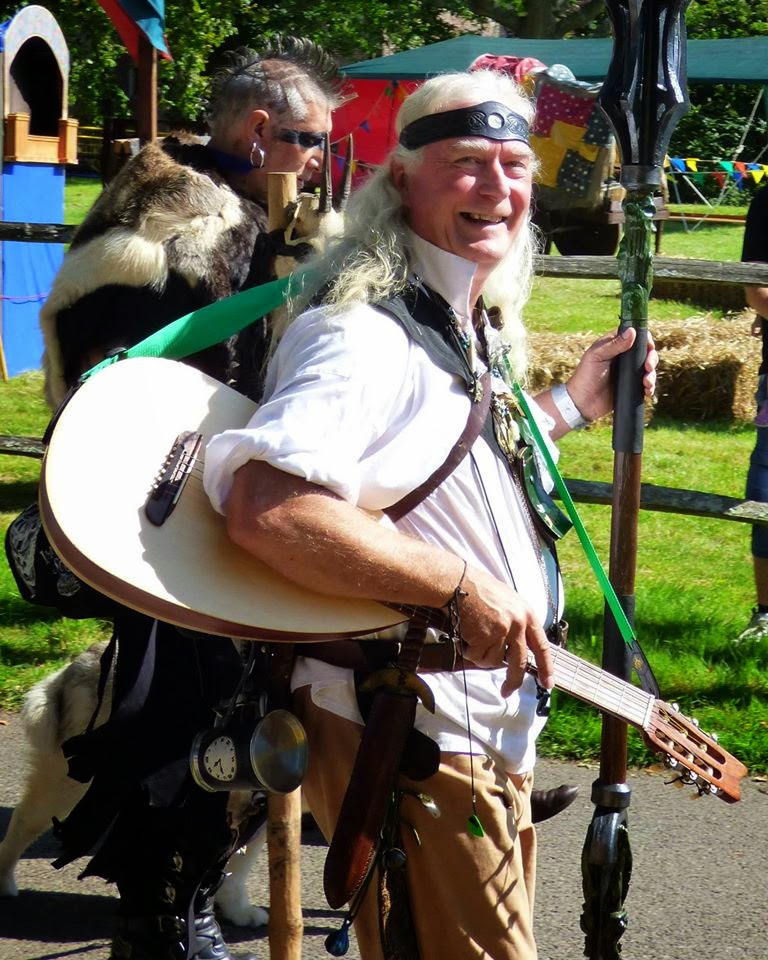 And this is how it works.. 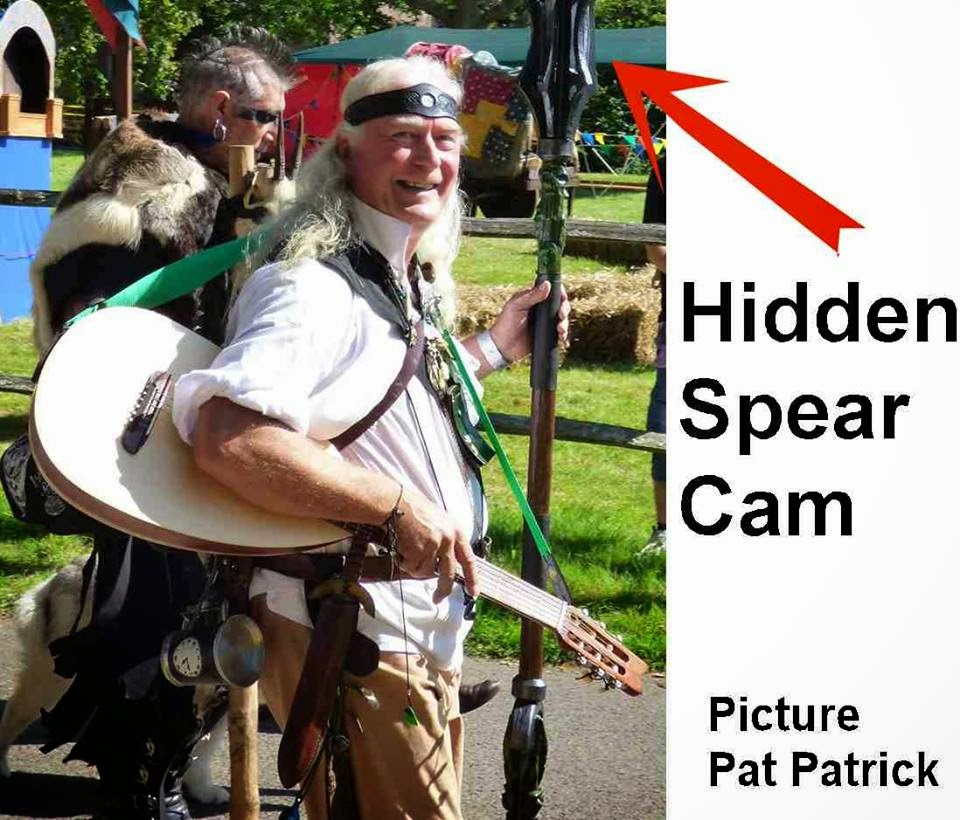 And so, with a bit of technology and a bit of video editing - the Vollsanger Eye view of the procession can be shown .. 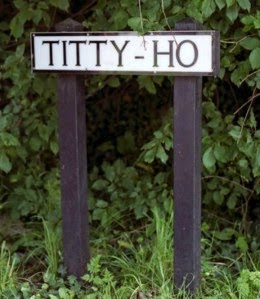