Thought for the day:"Why people are so bothered about me not knowing what the word 'apocalypse' means. It's not like it's the end of the world!"

The week seems to be slipping away - it is Monday again already !! Apparently Devon Appreciation day - but I am appreciating Crete instead - though it is a little warm for me - not that I am complaining - just stewing slightly
. 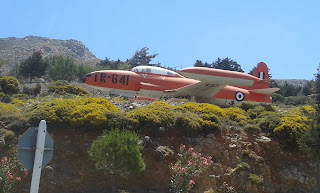 We found an aeroplane yesterday while driving, or was it Saturday? Probably Saturday as the days are drifting into each other. But as I was typing this I suddenly had a crisis of doubt - it happens sometimes as a writer. As I wrote aeroplane - using the spelling that was automatic to me - I thought to myself -" I have seen that written as airplane" and sure enough the microsoft spell checking facility on this blog underlined the word in red to show that it did not like it. I do not say "to say that it was wrong" as it is an american spell checker and as such gets most things wrong or at least incorrect as Written English. 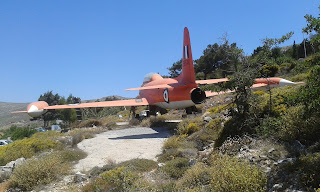 A check upon the Wiki shows me that either is now correct ..

First attested in English in the late 19th century (prior to the first sustained powered flight), the word airplane, like aeroplane, derives from the French aéroplane, which comes from the Greek ἀήρ (aēr), "air"[6] and either Latin planus, "level",[7] or Greek πλάνος (planos), "wandering".[8][9] "Aéroplane" originally referred just to the wing, as it is a plane moving through the air.[10] In an example of synecdoche, the word for the wing came to refer to the entire aircraft.
In the United States and Canada, the term "airplane" is used for powered fixed-wing aircraft. In the United Kingdom and most of the Commonwealth, the term "aeroplane" (/ˈɛərəpleɪn/[10]) is usually applied to these aircraft.

But here in Crete they like to tie a plane down in a unreachable position outside an army camp - well clamped to the stone to ensure that no-one walks off with it, and plenty of signs all around saying "No Photographs" which of course we ignored. 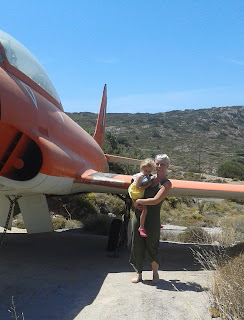 But the views are fine... 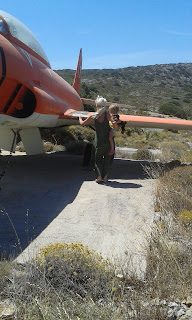 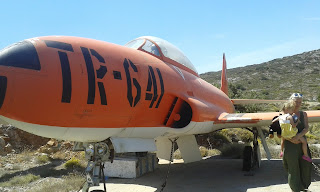 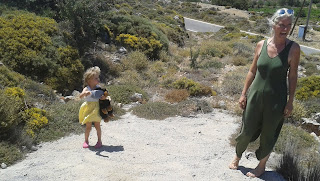 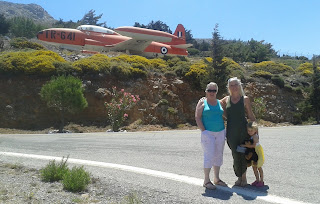 And so we have it - off to the beach and a quick dip and try to find some seeds for Susie to take home... 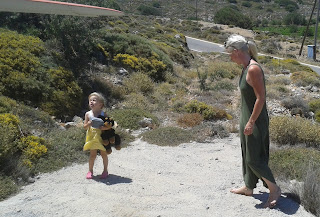 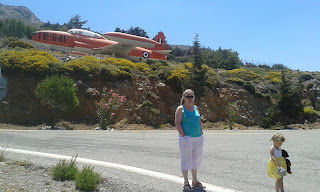 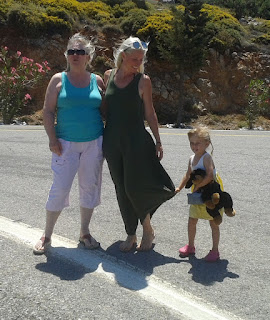 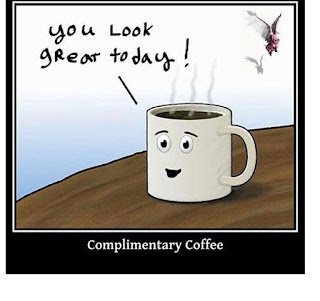