It is a full moon tonight. I am looking at it from the South Coast - Barton on Sea and it is very bright, very large - with a hint of orange in the perfect ovoid that is the moon.....  Means it is blooming cold out there I reckon!!  Part of me says " Go on outside and enjoy the sight" - but the more sensible part of me says "stay inside where it is warm and perhaps have a glass of scotch to celebrate this auspicious day...." 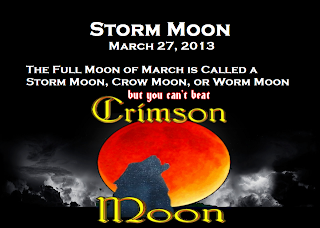 Seemed only appropriate to change the wording on this post I found on Facebook......  After all - I may no longer be the Crimson Moon but I still have an affinity....

So the Bothy has had a few personal tests..   Okay - when I found the aerial extension in the glove compartment I should perhaps have thought that there was a reason for it being detached - before I shinned up onto the roof and tried to screw it on - and broke the connection which had only a small bit of wire connecting it to the aerial ...  but two hours later and a bit of luck I finally managed to get it back to the way it was and we will see if the radio works on the journey home ....

Managed to connect the electrics and the 240 volt hookup seems to work. we have a solar panel on the roof and the light is on on the control panel - but I have no idea what it means and whether it is doing anything....

But lights and the telly work - well it would with an aerial ( not the one I "Fixed" - that was the radio..)  and a free view box - being that it is an old flat screen...  but there is an option to add some extra cables I suppose - DVD and Computer would be nice....

More interested today in the weather forecast for the weekend - very cold - maybe get to 6 degrees in the day if we are lucky...   but the wind is not likely to be too strong and there is less chance of precipitation - by which I mean snow or rain.....

Well tomorrow will be my first long journey in the Bothy  - so we will see the result....
In the meantime - I am about to watch Gandalf say "YOU SHALL NOT PASS!!"

Always a good moment to sign off.....
Posted by Vollsanger at 23:25 No comments:

Yesterday was the first day of Spring. Someone forgot to tell the weather - or maybe it is the climate at fault. Whichever it may be, most of the UK is being assaulted with snow again and here in Wales, we have the slightly warmer (so they say) air flow which means that we have more rain ...  cold rain ... almost sleet - but that would be exaggerating slightly.

So the chickens are out in the cold. The Chicken Coop is fully built and they only took one day to learn how to put themselves into the warm as it starts getting dark. An automatic door opener/shutter does the rest - so no requirement for early trips down the garden in slippers to open the doors first thing in the morning. The automatic water filler is almost ready to go into place and the food hoppers seem to be working when they don't knock them over.

Seems to be two cockerels and four hens - not too bad a ratio. Two for the pot and four layers when they get a little older. Next week will be the first test of the automatic systems when we go away for the week down to the South Coast - where it will probably snow again - if not a hurricane.

But Monday will allow us to go and look at our new venture - the Mobile Bothy. Yes I know a Bothy is a shepherd's hut and we will not be keeping sheep in it - but the intention is to get warm at events. And Bothy's used to be moved around so our new moving home will be our modern Bothy. Done the checks of the MOT on line and the history of the vehicle. Not huge mileage for the age 1999. Looks to be fairly sound - but I have the mechanical genius of one of our chickens, and could only tell you if the engine was missing if someone stole it! So it will be a case of paying the money and bringing it back for our local mechanic to look at and tell us if we bought a lemon! I rather hope not as it looks to be well fitted - so the worst scenario may be that we have to buy another van and transfer the campervan fittings over...  But would prefer not to have to. MOT until September and Tax till end of month - so will be able to make a decision and even consider selling if necessary - we may get our money back...... 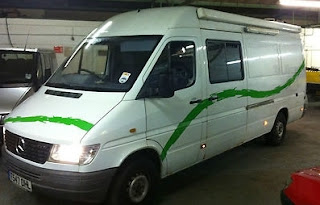 and of course - it does have a rather fetching green stripe around the bodywork....

So a weekend of waiting and then we will find out.....
In the meantime - it is umbrellas and winter woolies....
Posted by Vollsanger at 10:11 2 comments:

"Normal service will be resumed when it is warm enough".. Seemed a simple enough statement when made, but 8 days later it is still difficult to throw of the Bob Cratchit mannerisms of wearing gloves while trying to hit the keyboard....  Yes . I know that Bob had no computers - but work with me ... Okay ???

So a week goes by.
Managed to get to Coventry and load up the van and trailer for a LARP event for the Bear's in the middle of Staffordshire. Got to event and set up - - mainly in the dry !!!   Blooming cold though!!
Managed to dress the event and serve for a weekend, despite snow, sleet, rain and more rain - and did I mention the rain??
And cold!!  When you put your hot water bottle into your sleeping bag and wake to find it freezing cold - you expect to have been asleep for at least a couple of hours - not 53 minutes!!!!
Never going to sleep on the floor of the van again!!

Well - not in fact as the van has now gone to the new owners of the Crimson Moon - so they can get it down to Glastonbury next weekend. Which leaves me van-less - and therefore cold bed-less.
Alternatives come to mind - the tent - camping in a more traditional manner, a hotel ... more like it ... or a look onto Ebay to see if there is a nice van that you can turn onto a cosy home for the future....

And so - two minutes ago - it seems that I have just bought a Mercedes Van Camper Conversion - sitting in Hampshire now - and I just hope that the fact that the MOT runs until October means that it is sound. Sadly - we have experience of problems as well - but I will be positive and hopeful.

If it works - then Glastonbury Medieval Fayre will be viewed from the comfort of the new Bothy...

If it does not then a few thousand pounds have been spent and you may be able to watch the ramifications of this decision made from cold and fatigue...   it seemed like a good idea at the time after all

Weather forecast says it is going to get colder .....   oh well

Posted by Vollsanger at 23:01 No comments:

This service to be resumed when temperature allows...

Posted by Vollsanger at 00:56 No comments:

So, after having the pleasure of my sister's company across from the United States of America for the last three weeks, culminating in the highest ever levels in the DOW index, just beating the highest previous in 2007, which I am sure was not really affected by her absence from the country - though the concept of the butterfly wings keeps me sane here !! So, having experienced the finest, dryest, sunniest winter month since the dawn of creation, it rained today...

Yes - the day that she reached her homelands 24 hours air travel away from us - it is wet!

She has gloated for fur weeks that the weather is strange - we did not want to really support her fixations by agreeing - but the return of the rain today gives me some cause for thought...

I know from previous experience that my mother has acted as a weather vain.. more than that, a weather magnet for wet and windy wherever she has travelled across the world. Had we learned earlier her impact we could have made a fortune sending her to the famine riven parts of the world, at minimum cost !!!

Bit now I have to live with the reality that her daughter may just be the opposite - heralding fine weather when least expected.....

So as she goes back to Arizona, which incidentally experienced uncharacteristic snow, sleet, and wet while she was absent, I am sure that they will soon get back to their customary "DRY " heat .....  it is a desert after all!!!

Meanwhile - we will have to get used to our more seasonal damp - and not a Dry damp in sight!!!

Warmest day of the year, so far, according to the forecast people. After the weekend of freeze and cold, it was quite pleasant to have the sun shining. Today was a day of travelling. Sister back to the the airport to return to USA and the trailer full of the Crimson Moon to the Midlands to their new home.

So - a little more space in the back yard now - from the trailer - not the sister !! and the chance to have a   quiet hour in front of the telly before an early night.

Posted by Vollsanger at 21:17 No comments:

I do not think that I have ever been so cold in my life!!
Layers and layers of clothes, sleeping bags, blankets, but still it was a very cold event.
Pirates are meant to be tough, but the old Abbott Costello was not only frozen - but shamelessly chased and murdered only because he was the most Worthy !!!

But first event for the new owners of the Crimson Moon is over - and after loading the trailer today - we will be off to the Midlands again tomorrow.

But found a new band this weekend - the Longest Johns.
Heartily recommend them to anyone - never LARPed before - but played with the Scarlet rag team and assisted in a great event....

here is a sample of their songs...

Posted by Vollsanger at 22:42 No comments: