Thought for the day:"Little did I know that I was psychic."

So, Happy Burns Day ..
Just a few days until the Lodge evening .. 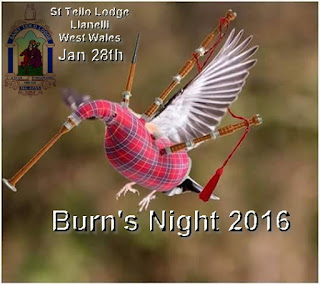 But in the meantime some little known facts about Mr Burns 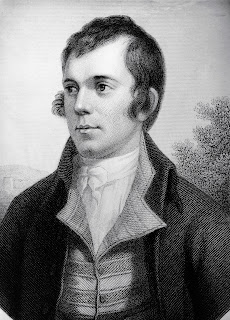 1. Burns is a music legend
Countless singers, from Mariah Carey to Susan Boyle, have covered Robert’s poem, Auld Lang Syne.
It has also made an appearance in to the Guiness Worlds Records, for being one of the most popular songs of all time – alongside Happy Birthday and For He’s A Jolly Good Fellow.


2. How many statues?
There are more statues of Robert Burns in the world than any other non-religious figure, after Queen Victoria and Christopher Columbus.
In fact, you can’t go anywhere without bumping in to him, with statues in Australia, Canada, America, New Zealand and of course, the UK.

3. He was a womaniser
When he wasn’t busy writing astounding poems, he had a pretty busy schedule in the bedroom too. Burns fathered twelve children from four different mothers.
His last child, Maxwell, was born on the day of his funeral in 1796.


4. Long hair, don’t care
He was also a rebel teenager, growing his hair long and styling it in a ponytail.

5. No net-worth
Despite being widely regarded as the national poet of Scotland, Burns died a very poor man, with approximately £1 to his name.
A net-worth of no more than the cost of two cans of Irn Bru.


6. He was very big headed
According to a plaster cast taken of his skull, Robert Burns had a larger head than the average man.
Now, nothing has been scientifically proven but perhaps that is why so much creative genius would flow from his noggin to paper.

7. Burns is Blowin’ in the Wind
Scotland’s National Bard has been the inspiration to many music legends, including Bob Dylan, who cited him as his greatest creative inspiration.


8. He inspired Thriller!
Even if you thought Mr Burns was just a character in The Simpsons, you have probably been listening to songs inspired by his writing.
It is said that Michael Jackson’s smash-hit ‘Thriller’ was inspired by Burn’s ‘Tam o’Shanter’ poem.

9. Michael Jackson loved Rabbie
Jacko’s obsession didn’t stop there; he even created a whole album based on Rabbie Burns’ poems.
He and David Guest collaborated to create a musical about the poet’s life.


10. Fans in high places
U.S president, Abraham Lincoln, could recite Burn’s work by heart. He would regularly break out in to sporadic verse to entertain guests at The White House.

11. Coca-Cola bottles
Rabbie’s still making history in the 21st century, appearing on the first ever, commemorative Coca-Cola bottle in 2009.
A big fan of booze, we reckon Robert’s drink would be a whisky and coke if he were around today. 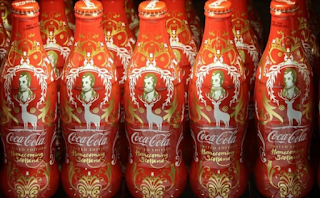 12. Tommy Hilfiger-Burns?
Robert Burn’s creative genius seems to have been passed down generations and even influences what’s on the catwalk today.
Fashion designer, Tommy Hilfiger, claims that he is a direct descendent of Burns.

13. Burns goes all Barrowman on us
John Barrowman played Robert Burns in a musical about his life in Denmark in 1996.


14. Died young
Robert Burns died at the young age of 37. The cause was speculated to be his boozing, unhealthy way of life in his earlier years.

15. Planetary poetry
British born astronaut, Nick Patrick, took a book of Robert Burns’ poetry on a space mission in 2010.
Rabbie’s poems, quite literally out of this world, have travelled a staggering 5.7 million miles and 217 orbits of the Earth.

Address to a Haggis

Fair fa' your honest, sonsie face,
Great chieftain o the puddin'-race!
Aboon them a' ye tak your place,
Painch, tripe, or thairm:
Weel are ye worthy o' a grace
As lang's my arm.

The groaning trencher there ye fill,
Your hurdies like a distant hill,
Your pin wad help to mend a mill
In time o need,
While thro your pores the dews distil
Like amber bead.

His knife see rustic Labour dight,
An cut you up wi ready slight,
Trenching your gushing entrails bright,
Like onie ditch;
And then, O what a glorious sight,
Warm-reekin, rich!

Then, horn for horn, they stretch an strive:
Deil tak the hindmost, on they drive,
Till a' their weel-swall'd kytes belyve
Are bent like drums;
The auld Guidman, maist like to rive,
'Bethankit' hums.

Is there that owre his French ragout,
Or olio that wad staw a sow,
Or fricassee wad mak her spew
Wi perfect scunner,
Looks down wi sneering, scornfu view
On sic a dinner?

Poor devil! see him owre his trash,
As feckless as a wither'd rash,
His spindle shank a guid whip-lash,
His nieve a nit;
Thro bloody flood or field to dash,
O how unfit!

But mark the Rustic, haggis-fed,
The trembling earth resounds his tread,
Clap in his walie nieve a blade,
He'll make it whissle;
An legs an arms, an heads will sned,
Like taps o thrissle.

Ye Pow'rs, wha mak mankind your care,
And dish them out their bill o fare,
Auld Scotland wants nae skinking ware
That jaups in luggies:
But, if ye wish her gratefu prayer,
Gie her a Haggis 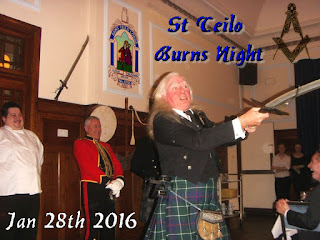 or if you prefer..

Address to a Haggis Translation

Fair and full is your honest, jolly face,
Great chieftain of the sausage race!
Above them all you take your place,
Stomach, tripe, or intestines:
Well are you worthy of a grace
As long as my arm.

The groaning trencher there you fill,
Your buttocks like a distant hill,
Your pin would help to mend a mill
In time of need,
While through your pores the dews distill
Like amber bead.

His knife see rustic Labour wipe,
And cut you up with ready slight,
Trenching your gushing entrails bright,
Like any ditch;
And then, O what a glorious sight,
Warm steaming, rich!

Then spoon for spoon, the stretch and strive:
Devil take the hindmost, on they drive,
Till all their well swollen bellies by-and-by
Are bent like drums;
Then old head of the table, most like to burst,
'The grace!' hums.

Is there that over his French ragout,
Or olio that would sicken a sow,
Or fricassee would make her vomit
With perfect disgust,
Looks down with sneering, scornful view
On such a dinner?

Poor devil! see him over his trash,
As feeble as a withered rush,
His thin legs a good whip-lash,
His fist a nut;
Through bloody flood or field to dash,
O how unfit.

But mark the Rustic, haggis-fed,
The trembling earth resounds his tread,
Clap in his ample fist a blade,
He'll make it whistle;
And legs, and arms, and heads will cut off
Like the heads of thistles.

You powers, who make mankind your care,
And dish them out their bill of fare,
Old Scotland wants no watery stuff,
That splashes in small wooden dishes;
But if you wish her grateful prayer,
Give her [Scotland] a Haggis! 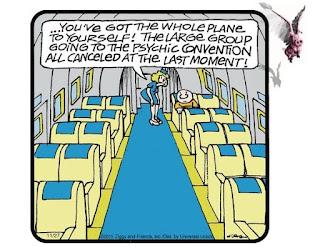