Thought for the day:"I don't drive a flashy car, but the policeman behind me does!!"

So, the first day of Summer? It is cold - about 12 degrees...  It is wet - I mean really throwing it down. It is windy, with gales coming into the west of 50-70mph... It is Wigan next weekend which is about par for the course all things considered...


But last weekend was sort of fun - playing Serenity and Firefly world - the 'verse... Playing Shepherd Lee Flet, an old style preacher with a shotgun to hand - the "good" book says not to kill, it does not say much about kneecaps!! 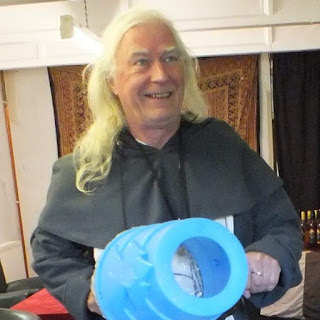 Also found a use for an old toy - the air canon ..   Needed painting really and getting to be less blue - but it was still fun... 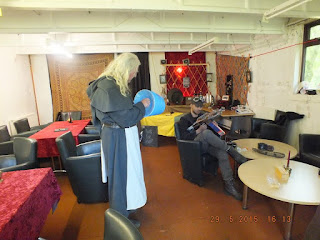 The Crimson Moon Tavern, care of the "pilot" and the "Companion" was at least inside and there was central heating for when it got cold.... Not a huge weekend - but every sale helps... 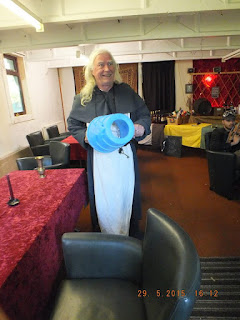 Will take the opportunity to sort and edit my own photos later if I get a chance. In the meantime I am ordering more meads and wines form Lyme Bay for the weekend and for the week after - where Medieval Mischief will be receiving the Mead Emporium.

And, as a nice bonus, a good friend has written an article published int he Daily Telegraph which specifically mentions the Crimson Moon Tavern.. so I thought I would transcribe it here.. or you can read the original at this address - the Daily Telegraph

Role play, chivalry and a world without sexism: Welcome to the ultimate female fantasy

Larping - live action role play - is typically seen as a 'geeky' male-dominated activity. But Kate Townshend, who met her husband when he was dressed as a knight, explains why it's starting to attract more and more women... 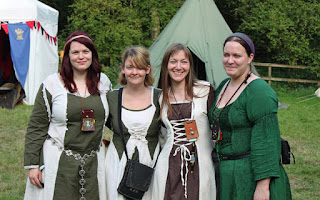 I have a confession to make. I met my husband in rather odd circumstances. And when I say 'rather odd', I mean the sort that would widely be considered a bit weird.
After all, everyone's internet dating these days. So even a story about how you first gazed smitten at someone's Tinder profile is now seen as rather mainstream. Nor was ours some kind of boarderline abusive Fifty Shades scenario.
Although technically, role play was involved...
In fact, it was 2am in the morning, somewhere in the wilds of Oxfordshire as a gale force wind ripped across a muddy field. I was drinking a cup of fiery mead in a candlelit tavern called the Crimson Moon when (quite literally) a knight in shining armour hoved into view.
The goblins and ogres sitting nearby started nudging each other and giggling - and the rest has become history. Of a sort.
You could be forgiven for thinking that the above was the result of some unwise use of illegal drugs, but the truth is both stranger and more mundane.
Actually, I was larping (live action role playing) - a sort of games-for-grown-ups style scenario, in this case with creatures that wouldn't look out of place in Lord of the Rings.
Simply, a group of people descend on a camp site, castle or country house for a weekend and become characters within a particular setting – a medieval warhost, futuristic space craft crew, Downton Abbey style nobility, or pretty much any other scenario you can imagine. 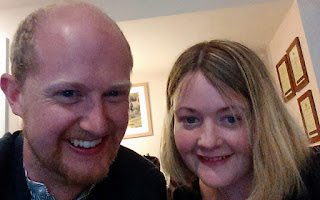 Fantasy, though is where things started and if you've heard of larp at all, you're probably imagining sweaty, overweight middle aged men with plastic swords and few prospects.
But games like mine, run by Curious Pastimes, actually attract all sorts of participants, including increasing numbers of women.
It's not quite a fifty-fifty split when it comes to gender balance, but your chances of seeing a graceful lady, fearsome shield maiden or fey queen are now pretty high.
It's a hobby with a bad reputation and if you're thinking that all I've managed to prove so far is that women can be just as nerdy and mal-adjusted as men, let me try and change your mind.
For starters, the larger 'fest' type games have hundreds (and sometimes thousands) of players, the vast majority of who have real-life families and responsible jobs. (Within my group - or 'nation' - alone there are two doctors, an A and E nurse, at least five teachers and all manner of successful business types.)
If you've ever watched an episode of Game of Thrones and thought “I could out-politic Cercei Lannister,” or “I could out-angst Jon Snow,” then you're already half-way into the mindset necessary for larp, and the success of such shows suggests that the drive towards escapism can be a powerful one.

In our medieval, fantasy-style setting we play out a variety of plots and interactions, with no script. It's frequently thought-provoking and always creative, collaborative and fun.
If you like problem-solving, socialising or using your imagination then there's an awful lot to enjoy. And if you prefer your hobbies to have a more physical element, then it's worth knowing that the larger events tend to also involve battles. Once you've run up hill in 30 degree heat, wearing plate armour, that spin class will start to look rather tame by comparison.

But while larp may be the black sheep of the family when it comes to gaming (online and pc in particular), it does share a historical tendency to exist as a 'male' space within popular imagination.
Since Gamergate - which has seen female gamers trolled viciously online - we all know that there are men who believe that the best way to preserve the 'integrity' of a given hobby is to see off any notions of diversity, as if somehow women can't be as passionate or committed as men can.
And whenever women are invited late to any party, such attitudes can linger for a minority. 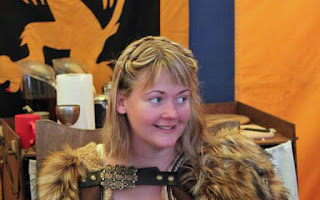 But while sexism does exist within larp, the far more prevalent feeling is one of a community – a community where lots of effort and love are unleashed in order to create an experience that is magical and enaging, and utterly unlike any other.
It's a community that's increasingly self-policing too – for every sexist voice that exists there are usually several others ready to shout them down.
My particular 'nation' is based on Arthurian ideas with knights and ladies all over the place. But half of our command team (the people in charge of organising the game) are female, and anyone suggesting that character types should be decided along gender lines would receive very short shrift indeed.

Others take things even further, using the imaginative spaces larp can create to simulate contexts in which gender inequality has no part to play.
The popular Profound Decisions game empire is based around a society in which discrimination based on values such as wisdom and ambition is encouraged, whereas discrimination on gender lines doesn't exist as a concept. Like any sort of fiction, larp is an opportunity to play with these ideas and - as a pass time that attracts more than its fair share of idealists and deep thinkers - there are some interesting things going on.

Of course, as my own experience proves, larp is also a fundamentally sociable hobby and if what you really fancy doing is engaging in some age of chivalry style flirtation there's plenty of room for that, too.

Last May, three years after I first met my knight, we got married surrounded by many of the friends we've met through larping. My tall, blond, personable boy is also clever, creative and not afraid of looking silly.

In my eyes, a past-time that encourages such qualities has got be worth a second look.