Thought for the day:"If an American turkey comes back to spend Christmas with the family after Thanksgiving, is it a poultrygeist?"

Many stalwarts dropped yesterday. Despite the care of such veterans, they still managed to fall at the hurdle leaving us, a few , a mighty few to carry the responsibilities. Why do I keep hearing the cry from Highlander in my ears? "There can only be ONE!" But which one?

Last night we managed to survive through luck, judgement, judicial questioning and bloody mindedness.  Penarth Masonic Hall, Crystal Lodge's Christmas Party. Safe in the car travelling without music I had made advance application to try to ensure safety during the evening.

Before heading out I spoke with my host And Smuggler to see if we could bribe the music technician into ensuring a certain song would not be played.  I received this gratifying response.....

"Such is our presence of mind, and dedication to the preservation of the art of the musician, that we shun the player of recorded sound to fit inducing illumination, and this evenings entertainment will be provided by a gathering of individuals with an array of implements made variously of metals, Woods and plastics with which they will produce pleasing harmonic sounds none of which will be , whamadelic, whamfastic, whasonic and thus I feel safe in assuring your remaining one of the unwhammed.
But remember the words of our master h......a...... “turn on not the radio for fear that the unworthy and uninitiated world may corrupt you with the insidious sounds of the whammeisters”

So with a certain degree of complacency I approached the Hall - well actually the Sat Nav proved useless and we had to ask three people directions, but duly arrived in Pirate Costume at the hall.

This may be the appropriate moment to mention that Mr Smuggler had informed us all that we were to wear pirate or period costume as the function was "re-enactment" based. and so we did 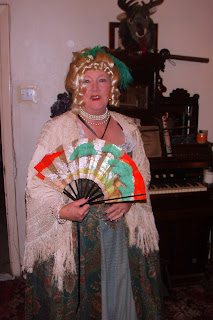 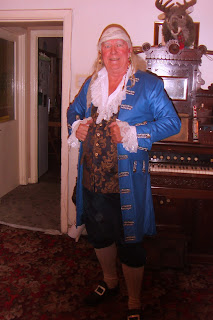 Only to find that in fact our table was the only one dressing in costume - everyone else being in normal Christmas finery!!  Good thing that we spend more time in our costumes than we do in Mufti!

But as we sat at the table listening to the piped music, and happy in the knowledge that the "live" band would be playing and that they were a 30's to 50's swing band - the background music was also period music - no chance of it reaching to 1986 - the release date...... Even with the Post Modern Jukebox - it could only be a cover!
Then... disaster. Over the beef and yorkshire pudding I heard the music change from 30's to modern!!
How could this happen? How could it be allowed to occur.

Taking my future in my hands I searched the bar and environs for the "band" St Louis Express, and found the lead singer sat in comfort in an arm chair. As I tentatively explained the rules of Whamageddon he watched with fascination and with initial expressions that he probably did not have it on the list, and couldn't be sure what was on the list I gave up and took myself back to the table with a heavy heart - knowing I had done what I could but Christmas Pudding was calling, and I should drown myself in the half glass of wine that I was allowed for the meal being on driving duty...

But, praise be to all bards of whatever ilk. I looked to the stage to see him looking at his machinery and technology and a few minutes later he strolled passed the table.
"Was two songs away" he remarked as he came passed." Don't worry - I fixed it!"
So I lift my glass to the lead singer and the members of St Louise Express - who were a remarkably good band by the way with an awesome saxophonist and great choice of music.
I remain #unbowed and #unwhamed together with Andy Smuggler, Elidh Prentice, Phil Bartlett, Amanda Jane Evans, Andy Burke, and Frances Roberson 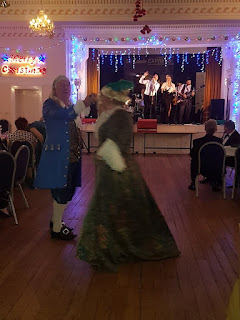 And with the finest looking lady at the ball I tempted her with my Gold .. 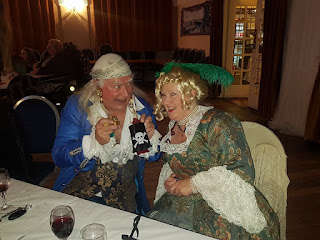 A good time had by all

And in Festive news... 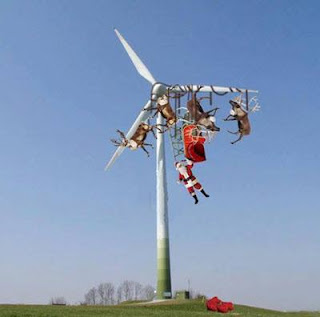 And a Cautionary tale form the Christmas Trees 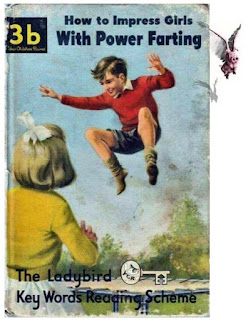