So a busy weekend in the world of Element, where the Dark Bard Mudslinger, that evil entity who tears pages out of books to torment Sage the Librarian, and by doing so changes the course of history, that Bard who sings the Naughty Songs. that Bard that the children of Element LARP have been fighting all these years.. I understand that they are trying to track down the three ghosts from a Christmas Carol who have been freed from their book and are currently lost in the ether..

But on Friday, the Dark Bard arrived in the Mead hall, and by the despicable act of tearing out all 608 pages of "The never ending Story" in an incantation, managed to place all the adults into a comotose situation...    but those pesky kids !!  They were still there - and still a problem .. 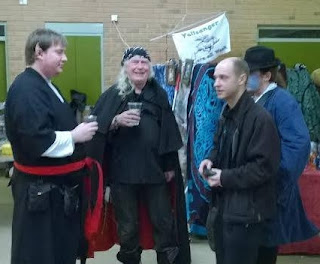 The Bard tried his ploys - invited them to join in his favourite song "And a Dark One .. All made out of Yicky Yucky"  but they did not seem to fear him.. Oh they ran out of his reach, but as he plucked the evil mandolin of Antioch they ran and circled him..   The bravest struck again and again with their swords - but it was as though their weapons bounced like rubber from his limbs as he laughed a maniacal chortle...

His strength increased as one, and then another started to dance  along with the infectious tune..   "Join Me" he cried "You can stay young for ever - never get old and ugly like these Oldies who sleep at your feet..  No more bed times !!  Eat sweeties throughout the night and never have to clean your teeth again!!!" 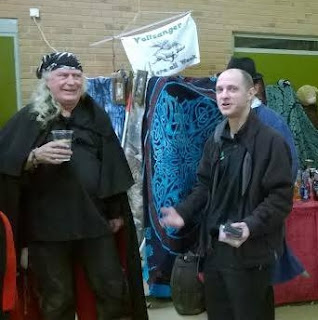 His tune continued and the Dark Bard smiled with a slightly evil grin ...  only if you looked into his eyes you would see that there was not smile there - only cold, grim, evil...

suddenly - one child piped up with And a GREEN One.. as he cavorted around...
A slight stumble ..  A loss of words for a second - but then the Dark Bard was back again

Once again the swords and daggers hit him - but while this made no effect - the children chanting "A Green One" slowly sapped all the strength from the  body that he had stolen...

Vollsanger struggled to take back his body
With little strength - he joined with the Children in their chorus
Every so often the Dark Bard would shout out but Vollsanger was regaining his primary position
and though slumped on the ground - was once more himself...

This seemed like an impasse - but as all baddies, the Dark Bard could not Hold his Tongue..
"Ha .. Without his magical headband, his amulet of Crimson Moon and the Vollsanger Amulet of the Flying Pig - those great Talismans always seen around the neck of the Old Bard he will never be safe .."

Some of the elders were stirring , but clearly not in a position to be able to save the day - this was  a matter for the Children - and they set about searching for the magical items ...  The headband was found on an old barrel, and placed upon the Bard's Head...  he seemed to strengthen immediately...  Hidden in the Alchemy piles, a necklet with the image of the Crimson Moon was found and placed around his neck  and after much search - a flying pig motif was also recovered ...
As the three magical items were united upon the body of the Old Bard - you could almost see a shadow pass from his body and drift into the air and the old Bard smiled weakly and looked at the Children who had been his saviours....

"The Dark Bard has been banished - but because he has been in me - I think he has Marley in prison - there is something about Ghosts .. but in the meantime - we must clear the evil from the room

We need to sing a cleansing Song .." 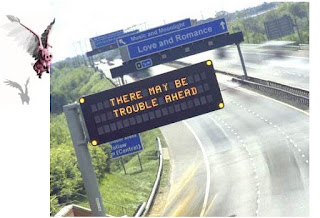