Thought for the day:"If you cross a turkey with an evil spirit do you get a poultrygeist?"

We do not do Thanksgiving in the UK. I am pleased with that - we do not have that part of history to celebrate and we have already imported too many commercial festivals. Indeed the day after Thanksgiving is traditionally Black Friday in the US - and therefore I can see no reason whatsoever for it to be transported across to the UK either.

Don't get me wrong, I am happy to change a few pictures and put a turkey onto Facebook to support our colonial fellows, but I am aggravated by the media being filled with "Black Friday" advertising..

I shall not be out shopping. I feel that it is only another excuse to advertise and therefore will carry on as usual.. But I do get the impression that some businesses are taking the mickey. Are people that gullible??  But then I look around and think - maybe they are...

Which brings me to a short tale ..

A young man named Kelvin received a parrot as a gift. The parrot had a bad attitude and an even worse vocabulary. Every word out of the birds mouth was rude, obnoxious and laced with profanity. Kelvin tried and tried to change the birds attitude by consistently saying only polite words, playing soft music and anything else he could think of to 'clean up' the birds vocabulary.

Finally, Kelvin, was fed up and he yelled at the parrot. The parrot yelled back. Kelvin shook the parrot and the parrot got angrier and even more rude. Kelvin in desperation, threw up his hand, grabbed the bird and put him in the freezer.

For a few minutes the parrot squawked and kicked and screamed. Then suddenly there was total quiet. Not a peep was heard for over a minute. Fearing that he'd hurt the parrot, Kelvin quickly opened the door to the freezer.

The parrot calmly stepped out onto Kelvin's outstretched arms and said "I believe I may have offended you with my rude language and actions. I'm sincerely remorseful for my inappropriate transgressions and I fully intend to do everything I can to correct my rude and unforgivable behaviour." Kelvin was stunned at the change in the birds attitude.

As he was about to ask the parrot what had made such a dramatic change in his behaviour, the bird spoke-up, very softly, "May I ask what the turkey did?"

St Teilo Lodge tonight - a first degree ceremony.
I shall lift a glass in Thanksgiving when I get through the ceremony tonight. 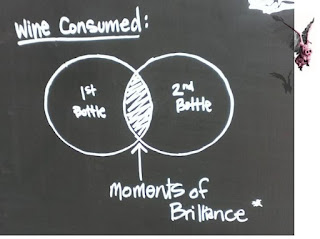